Epstein Barr Virus (EBV) and its role in Chronic Illness

Back in 2015 I experienced some serious health issues which led me on a journey of intensive research to find out what was happening to my body and how to get myself well again. I had studied nutrition and natural healing for many years. I tried all sorts of diets, cleanses, supplements and healers but nothing was helping me to get better.

It wasn’t until I came across Anthony Williams book Medical Medium(he’s also writtenLife-Changing Foodsand Thyroid Healing) that the answers fell into place for me. I came to understand that there is a silent epidemic of illnesses happening right now which are caused by the Epstein Barr Virus (EBV).  Millions of people are suffering with health conditions, with no understanding of the cause or the solution. These people spend years going from doctor to natural health practitioner, spending all their money to find a cure, and at best they just manage to function, at worse their conditions progress. 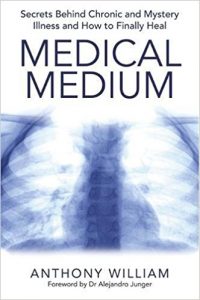 I am passionate about getting this information out there so that people can start to restore their faith in healing. Once we understand what the cause is we can start to take the right steps to getting well again. We can laugh in the face of anyone who tells us that our illness is autoimmune, knowing that our bodies never work deliberately against us in that way.

This blog is for those people who are suffering and looking for the ‘missing piece of the puzzle’. It is for my clients who have been found to have EBV in their systems though kinesiology testing, and need more information to support the protocol that I am guiding them on.  Over the coming weeks I will produce blogs on EBV’s close associates Shingles, Steptococcus and Heavy Metals.

EBV was once a harmless, herpetic, docile virus and we lived peacefully alongside each other.

It wasn’t until the Industrial Revolution when we started intensifying our release of toxic heavy metals into the environment that things started to change. Arsenic and lead were diluted in water and used as pesticides, herbicides and fungicides. These were sprayed over all our gardens and used in our food production. Mercury was already prevalent in the environment having been used in hat making, shoes and as natural medicine for many years.

Over time EBV learned how to use these metals as a food source and started hunting it out. Maybe this would have been a good thing as it gobbled up the toxins from us, but over time these metals caused EBV to mutate and become more harmful to the body.

Around the 1940’s and 50’s, women who were born at the turn of the century started getting sick and suffering from hot flashes, aches, pains and fatigue. They were told it was all in their heads and that they must be insane. That was when the label of ‘hormonal issues’ were born. But these hormonal problems had not been seen before that. It was EBV.

In 1964, two virologists discovered the virus and named it after the doctors Epstein and Barr. They began correlating the virus with some forms of cancer but it wasn’t long before funding was lost. The research didn’t continue long enough for science to understand the full action of EBV in the body.

Over the last 100 years the virus has mutated into 60+ different strains. Some are more aggressive than others. This is why people experience different symptoms and issues. Unfortunately it is young women now who are experiencing the most aggressive strains.

What’s worse is that because the medical establishment found high antibody’s present in persons with these illnesses they concluded that it must be the immune system that is causing the problem by attacking that organ or tissue. People’s illnesses were classed as autoimmune and patients were sent home thinking they were somehow responsible because their bodies were attacking themselves. The truth is that the body is producing these antibodies to fight EBV.

The medical community are unaware that EBV is the cause of these issues, not the immune system, which is always doing its best to protect us. Today, women and men of all ages are affected by symptoms of EBV and get labeled according to their symptoms rather than the cause. Illnesses include:

There are four stages of EBV within the body:

Now perhaps you see where some of your symptoms start to add up?

Where did I catch it from?

When someone has tonsillitis, glandular fever or Mono, people are highly contagious for EBV. That’s why it’s referred to as the ‘kissing disease’. Colleges and Universities are perfect places to catch EBV. Once the virus moves to the organs and out of the bloodstream (Stage 2) it is going o be harder to catch from other people as its tucked away in the tissue. The other way of transferring it could be from mother to child and also I have heard vaccines mentioned as a possible route of entry. Little is known quite frankly.

It’s so important to know what is causing your problems so that you can tackle it. Otherwise you are running around blindly knocking on doors that can’t lead you anywhere. People spend decades trying to get answers, trying different approaches and healing modalities. You have to know what the problem is to solve it.

To heal from EBV and stop it doing damage we have to knock down the viral load and restore the nervous system. This could take anything from a few months to a few years to get better depending on the length of time you have had it and the severity of the symptoms.

A good place to start is reading the book Medical Medium. I will also put other resources here.

How I can help

I work with clients to help them work out what is causing their health symptoms and how to put things right. If you are concerned that your symptoms may be due to EBV I can work with you to develop a healing protocol by identifying which supplements you need and at what dose. It can be daunting at first to make these lifestyle changes and I can also help to guide and advise you on replacement products and menu ideas.

Please feel free to contact meand we can talk about how I may be able to help you. I am a Systematic Kinesiologist, Nutritional Therapist and Cognitive and Transpersonal Hypnotherapist working in St Albans and London UK.

EBV feeds on certain substances in our diets so its important to eliminate them from your diet. I can provide advice and guidance on how to do this and what replacements you can use instead. The no foods are:

We also need to nourish ourselves with fresh plant-based fruit and vegetables. Viruses can’t feed of fresh fruit and vegetables so these should form the main part of the diet if you are healing from EBV. Cut down on grain which feeds Strep (a co-factor of EBV)

If you are working with me I will guide you to which supplements you need and what doses to take through Kinesiology testing. Not every supplement is suitable for everyone and you don’t want to overload your system by giving your body what is not helping it. Below are some of the supplements I would test you for. It’s not a conclusive list.

For more information I recommend that you read the book Medical Medium. There are other resources here.

If you feel you would like some help working out your protocol, and how to incorporate it into your ongoing lifestyle, then feel free to contact me and we can talk about how I may be able to help you. I am a Systematic Kinesiologist, Nutritional Therapist and Cognitive and Transpersonal Hypnotherapist working in St Albans and London UK.

Creating change by working with the unconscious mind Why the need for heavy metal detoxification?

Celery, the vegetable that most of us could have happily lived without, has actually been hiding some fascinating medicinal benefits.  Anthony William, shares all in his book Celery Juice – the most powerful medicine of our time.

Foods to avoid whilst healing

When working with a client it is always important to establish which foods are going to support or hinder their healing, according to their current situation and health status. Most people come to come to me when they are dealing with quite troubling symptoms or conditions, and so it’s is usually the case that dietary […]

Why the need for heavy metal detoxification?